Life in the camps can be different in each one. It can be slow and easy going in one, depending on what is going on, and it can be lively or even hectic in another. It depends largely on what is the purpose of the camp. Some concentrate on performing plays on a small stage. Others have diorama exhibits that people see as they walk through the camp. Some have lectures on a stage, or bhajans. Others have distribution of food (prasada) and tents for guests. And a few did all of the above, and more.

One of the main reasons for going to the Kumbha Mela is to be spiritually rejuvenated. So pilgrims wander throughout the Mela visiting the hundreds of camps that the various spiritual groups and organizations occupy to present their different spiritual outlooks. The larger and better financed spiritual groups set up big temple fronts, such as this one pictured below.

Below we can see that they had plenty of space for signs on it as well as displaying bigger than life size photos of the spiritual leaders of the group. Inside the doorway is often but a large pandal tent, set up with lights and large public address systems that not only had loud speakers in the tent, but outside on the temple front and light posts as well. That way it might attract pilgrims passing by to come in and listen. Often times, while walking down the streets, you would barely get out of the range of one set of loudspeakers when you would get into the range of another. These might carry the lectures going on within the tents, or the songs, rituals, and whatever else that was going on inside. Sometimes when I would go to the tent in which I was staying, I could hear the numerous loudspeakers from all around. It would be like a loud unorganized chorus coming at you from all directions, and going on until even one or two in the morning. And then some beginning again at 4:00 AM.

Some camps had set up pandal tents so large that they needed lights inside to see, even in the daytime. This tent had a nice stage, with four personalities to engage the people in listening to lectures as well as devotional songs, bhajans.

Some groups put on plays, such as this one presenting a dramatization from the Ramayana. 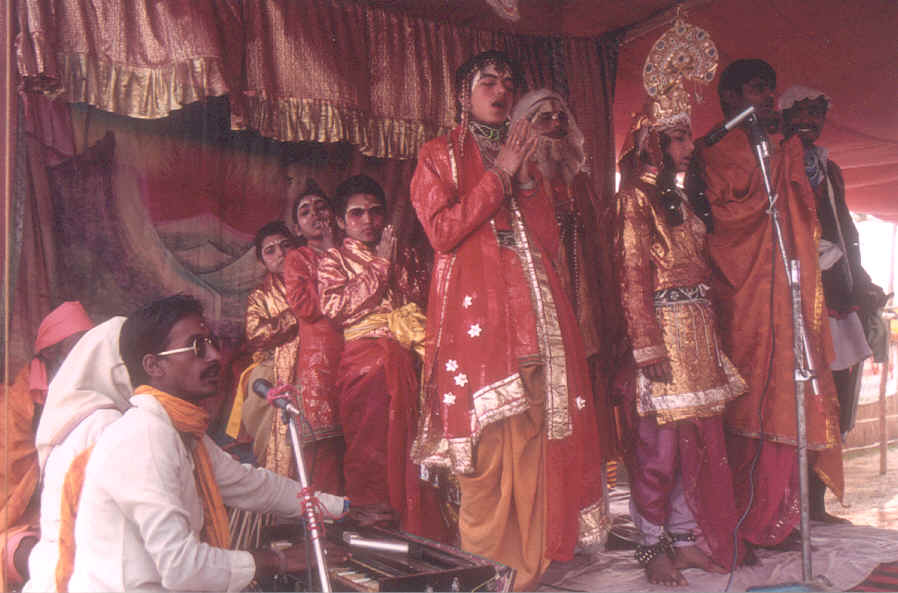 Other camps may consist of one spiritual teacher, such as we see on the left, plus a few of his followers, a pandal tent for presentations, and a few smaller tents for residence. He had a simple public address system, and a small platform to sit on. Yet, he had a sizable crowd in front of him engaged in listening to him.

One such camp that had a variety of things pilgrims could see and do was the Iskcon camp, where I stayed, being a disciple of Srila A. C. Bhaktivedanta Swami Prabhupada. It was one of the liveliest camps at the Kumbha Mela. From the photo below we can get an idea of how many people were continually coming in and out of the camp. 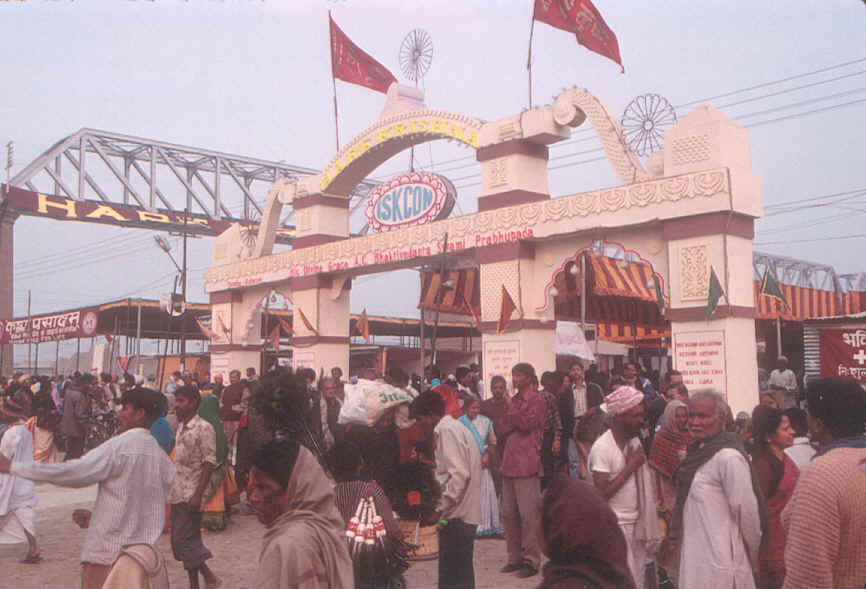 The camp offered many different activities and services for the general pilgrims, sadhus, and guests. Entering the camp, the pilgrims first saw many diorama exhibits displaying the pastimes of Lord Krishna. There was also snack shops offering food and bottled water, a necessity while traveling in India. The pandal tent was always full of pilgrims and sadhus who would stop by, get settled, and listen to lectures on philosophy, or stories and plays of the  pastimes of Lord Krishna, or devotional bhajans. 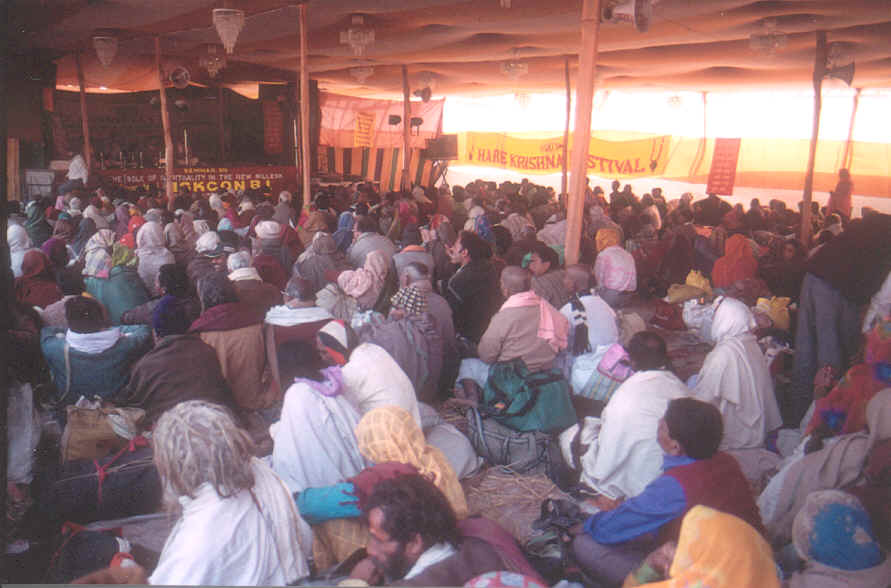 The enthusiasm of the guests and pilgrims was always apparent for what was offered in the pandal tent and other areas of the camp. This is the purpose of the Kumbha Mela festival, for pilgrims to go and return home being spiritually rejuvenated. And seeing so many people enlivened in this way is certainly helpful toward doing just that. 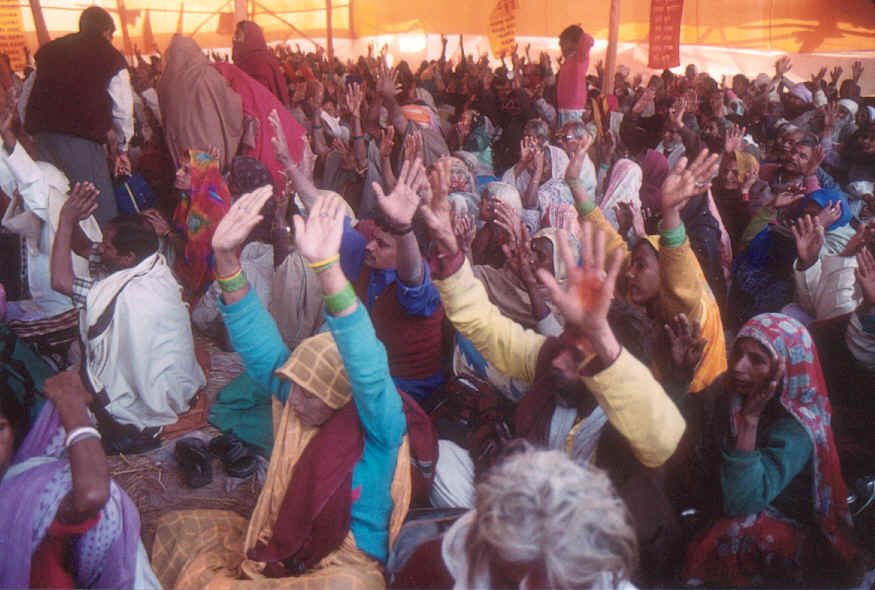 Not only were people spiritually invigorated by activities in the pandal and other areas of the camp, but interest was high for the books of Srila Prabhupada that were offered as well. This was one of the differences between the other camps that may give blessings while the pilgrims were there at the Mela, but such books would also provide for a pilgrim's continuing spiritual advancement after they left for home. It was also a way of taking the significance of the Mela and the ancient Vedic tradition away with you.

Throughout the day and at night there was the regular arati ceremony performed to the Deities of Lord Caitanya and Nityananda and Srila Prabhupada. This was another part of the camp that the Pilgrims enjoyed. Pulled by the large bulls, the Deities would also be taken out through the streets of the Kumbha Mela on the cart for Harer Nama, singing the names of the Lord. The crowd would always gather and participate, and follow along through the streets. Furthermore, one of the most important services offered to the pilgrims at the Mela was the "Iskcon Food for Life" program, in which the devotees supplied as many as three to five thousand plates of free prasada (food first offered to God) every day. Not only did pilgrims come, but also holy men, sadhus and visiting Westerners who appreciated it.

Here we can see the first round of people coming in for the prasada. Eating off of banana leaf plates, they would get a full course meal of several preparations. If you attended the Mela, food could often be a major concern if you stayed where they didn't provide any. Other than taking a few hours to walk into town, programs such as this was the only way one could find good food.

Below is a view of only one part of the large kitchen that was built at the camp. Pits were dug out of the ground in which wood or coal would be burned for heat. Bricks would be placed around the pit upon which the large pots were placed to cook the food. It was very hot in this area. I nearly fell over from the heat as I took this photo. Not only was there cooking to do, but then there is always the clean up that must be done. This was an ongoing business not only for the pilgrims, but as well as for all of the paying guests that stayed in the many tents that the Iskcon camp provided. From this we can begin to understand how busy things could be in a camp such as this. Thus, we can understand that the Kumbha Mela was not only a place for pilgrims to come and be spiritually recharged, but also for devotees to come and serve that purpose, and in this way also become spiritually enlivened by such activities. In so many ways, the Kumbha Mela is a life-changing experience.