Srimati Radharani is the Supreme Goddess. She is most always seen with Lord Krishna. It is described that She is the Chief Associate and devotee of Lord Krishna, and topmost of all Goddesses. Her name means the She is the most excellent worshiper of Lord Krishna. However, She is also an expansion of the Lord's energy. Since She is also an extension of Krishna, She is the feminine aspect of God. Thus, in the Gaudiya Vaishnava tradition, God is both male and female. They are One, but Krishna expands into two, Himself and Radharani, for the sake of divine loving pastimes. If They remained as One, then there is no relationship, there are no pastimes, and there can be no dynamic exchange of love. (Caitanya-caritamrita, Adi-lila, 4.55-56) Actually, if we all remained merged or amalgamated into one single force or light, then there is no further need of anything else. There certainly would be no need for the material manifestation to provide the innumerable conditioned souls with the means to seek out the way to satisfy their senses, minds, emotions, desires for self-expression, intellectual pursuits, and on and on.

So, similarly, the spiritual world is the manifestation wherein all souls have the opportunity to engage in a multitude of pastimes in loving relationships in full spiritual variety, without the many hindrances we find in this material world. The only difference is that the spiritual world is centered around the Supreme Being. And that Supreme Personality has expanded Himself into Radharani for exhibiting the supreme loving relationship, in which so many others assist Them.

In the Brihad-Gautamiya Tantra, Radharani is described as follows:

"The transcendental goddess Srimati Radharani is the direct counterpart of Lord Sri Krishna. She is the central figure for all the goddesses of fortune. She possesses all the attractiveness to attract the all-attractive Personality of Godhead. She is the primeval internal potency of the Lord."

It is explained that the beloved consorts of Lord Krishna are of three kinds, namely the goddesses of fortune or Lakshmis, His queens, and the milkmaids of Vraja called the gopis. All of them proceed from Radharani. The Lakshmis are partial manifestations, or plenary portions, of Srimati Radharani, while the queens in Vaikuntha and in Dvaraka are reflections of Her image. The Vraja-devis or gopis are Her expansions and assist in the increase of rasa, or the divine loving pastimes. Among them there are many groups that have various sentiments and moods, which help Lord Krishna taste the sweetness of the rasa dance and other pastimes. (Cc.Adi-lila. 4. 75-81) 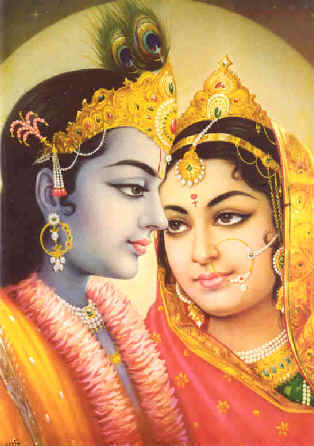 Radharani has many names according to Her qualities and characteristics. Some of the names that Radharani is known by include Govinda-anandini--She who gives pleasure to Govinda [Krishna]; Govinda-mohini--She who mystifies Govinda; Govinda-sarvasa--the all-in-all of Lord Govinda; Shiromani Sarva-kanta--the crown jewel of all the Lord's consorts; and Krishnamayi--the one who sees Krishna both within and without. She is also called Radhika in the Puranas because Her worship [aradhana] of the Lord consists of fulfilling His desires. Aradhana is the root of the name Radharani, which indicates one who excels in worshiping the Lord. She is also called Sarva-lakshmi, the original source of all the goddesses of fortune. This also means that She is the supreme energy of Lord Krishna, and represents His six opulences, which include fame, fortune, strength, wealth, knowledge, and detachment. She is also known as Sarva-kanti, which indicates that all beauty and luster rest in Her body, and all the Lakshmis derive their beauty from Her. It also means that all the desires of Lord Krishna rest in Srimati Radharani. As Lord Krishna enchants the world with His beauty and charm, Sri Radha enchants Him. Therefore She is the Supreme Goddess. Sri Radha is the full power, and Lord Krishna is the possessor of full power. (Cc.Adi-lila, 4.82, 84, 87-96) Thus, the two are non-different, as the sunshine is nondifferent from the sun, or as the energy is non-different from the energetic or source of energy.

In this way, without Radha there is no meaning to Krishna and without Krishna there is no meaning to Radha. Because of this, in the Vaishnava tradition we always pay respects first to the Lord's internal energy in the form of Radha, and then to the Lord. Thus They are referred to as Radha-Krishna, or in other names as Sita-Rama, Lakshmi-Narayana, and so on. In this way, Radha and Krishna are one, but when Lord Krishna wants to enjoy, He manifests Himself as Radharani. Otherwise, there is no energy in which Krishna can attain pleasure outside Himself.

To understand Himself through the agency of Radha, or the hladini-shakti, the Lord manifests Himself as Lord Chaitanya, who is Lord Krishna but with the super-excellent emotions of Radharani's love toward Lord Krishna. This is because the Lord accepts a position and the emotions of a devotee in order to fully taste His own sweetness. 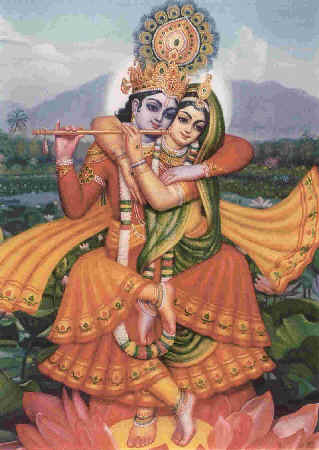 It is also described that the potency of love of God is called hladini, the Lord's pleasure potency. Whenever the Lord wants to enjoy pleasure, He exhibits His own spiritual potency known as hladini. And the essence of that love is in the emotion called bhava. The ultimate development of that emotion is mahabhava, or great bhava. Mahabhava is full of the pleasure potency, and it is an exhibition of the highest love for Lord Krishna. Sri Radharani is the embodiment of that transcendental consciousness found in mahabhava. Her mind, senses and body are steeped in that highest sort of love for Krishna. She is as spiritual as the Lord Himself. In fact, being the personification of the hladini-shakti, the pleasure giving energy of the Lord, She is the only source of enjoyment for the Lord. This pleasure potency manifests spiritually as Radharani in a way that attracts even Lord Krishna. He takes no pleasure in anything material. The Lord could never enjoy anything that is less spiritual than Himself. Therefore Radha and Krishna are identical. Then She expands Herself into different forms, known as Lalita, Visakha, and Her other confidential associates that increase the mood of divine love. However, being the Lord's hladini feature, She is also the ultimate source of all happiness for all the living beings. In other words, everything that gives pleasure and happiness within the spiritual or the material worlds is because of Her and the energy that emanates from Her. (Cc.Adi-lila.4.68-72) That same pleasure potency expands and spreads throughout the spiritual worlds, and then descends into the material creation into the many forms of happiness that is experienced by the conditioned soul, though it may be called by different names and perceived in assorted ways. Since we are all parts and parcels of the Lord, we also have that pleasure potency within us to a minute degree. But we are trying to enjoy it in the material world. Therefore we are like sparks that are dying out because we have left our place which is in the blazing fire of Lord Krishna's association.

The Hare Krishna mantra also directs one's attention and devotion to Radha as well as Krishna. Radha is also known as Mother Hara, which is the name Hare in the vocative form within the mantra. So in chanting Hare Krishna, we are first approaching the Lord's internal potency and asking Radha to please engage us in the service of Lord Krishna. Concentrating on Krishna through His names is one form of that service. In other words, it is through Radha that one more easily attains Krishna and service to Krishna. This is the advantage of approaching Lord Krishna through Radharani.

The descriptions of the beauty of Radharani are wonderfully poetic and descriptive. Actually, the residents of Vrindavana care more for Radharani than they do for Lord Krishna. They know that Krishna can be influenced through Radharani. They know that Radha can bring one to Krishna. She is also the compassionate nature of the Lord, and thus more easily approached than trying to reach Lord Krishna directly. And when we read these descriptions of Radha, it is no wonder why they are devoted to Her. For example, it is explained that Srimati Radharani has unlimited transcendental qualities, of which twenty-five are principal. These include: 1) She is very sweet. 2) She is always freshly youthful. 3) Her eyes are restless. 4) She smiles brightly. 5) She has beautiful, auspicious lines. 6) She makes Krishna happy with Her bodily aroma. 7) She is very expert in singing. 8) Her speech is charming. 9) She is very expert in joking and speaking pleasantly. 10) She is very humble and meek. 11) She is always full of mercy. 12) She is cunning. 13) She is expert in executing Her duties. 14) She is shy. 15) She is always respectful. 16) She is always calm. 17) She is always grave. 18) She is expert in enjoying life. 19) She is situated in the topmost level of ecstatic love. 20) She is the reservoir of loving affairs in Gokula. 21) She is the most famous of submissive devotees. 22) She is very affectionate to elderly people. 23) She is very submissive to the love of Her friends. 24) She is the chief gopi. 25) She always keeps Krishna under Her control. In short, She possesses unlimited transcendental qualities, just as Lord Krishna does. (Ujjvala-nilamani, Sri-radha-prakarana 11-15) 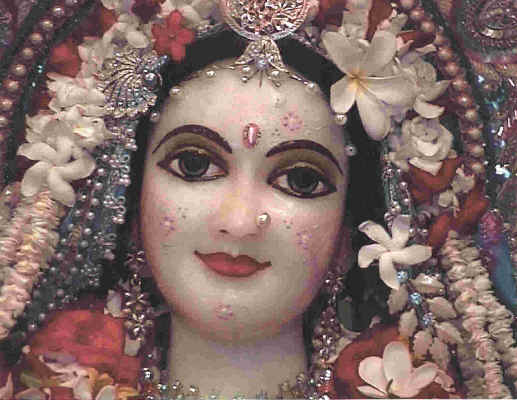 "Although the effulgence of the moon is brilliant initially at night, in the daytime it fades away. Similarly, although the lotus is beautiful during the daytime, at night it closes. But, O My friend, the face of My most dear Srimati Radharani is always bright and beautiful, both day and night. Therefore, to what can Her face be compared?" (Vidagdha-madhava 5.20)

"When Srimati Radharani smiles, waves of joy overtake Her cheeks, and Her arched eyebrows dance like the bow of Cupid. Her glance is so enchanting that it is like a dancing bumblebee, moving unsteadily due to intoxication. That bee has bitten the whorl of My heart." (Vidagdha-madhava 2.51)

There is much more to be known about Srimati Radharani, but this should suffice for now. Thus, the spiritual exchange of divine love between Radha and Krishna is the display of the internal energy of the Lord, and is very confidential and difficult to understand. No materialist can begin to understand this topic of the relationship between Radharani and Lord Krishna. But the more we awaken our dormant love for God, which is natural state of being for a fully awakened soul, then the more we can comprehend and actually enter into such spiritual loving exchanges.

You can read about Her sacred bathing place at: "Radha Kund: The Holy Place of Srimati Radharani." 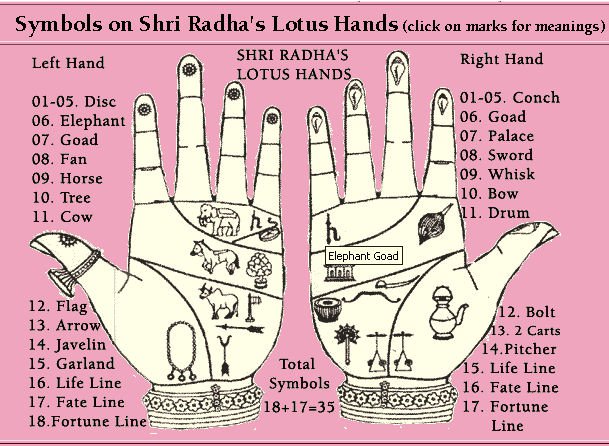