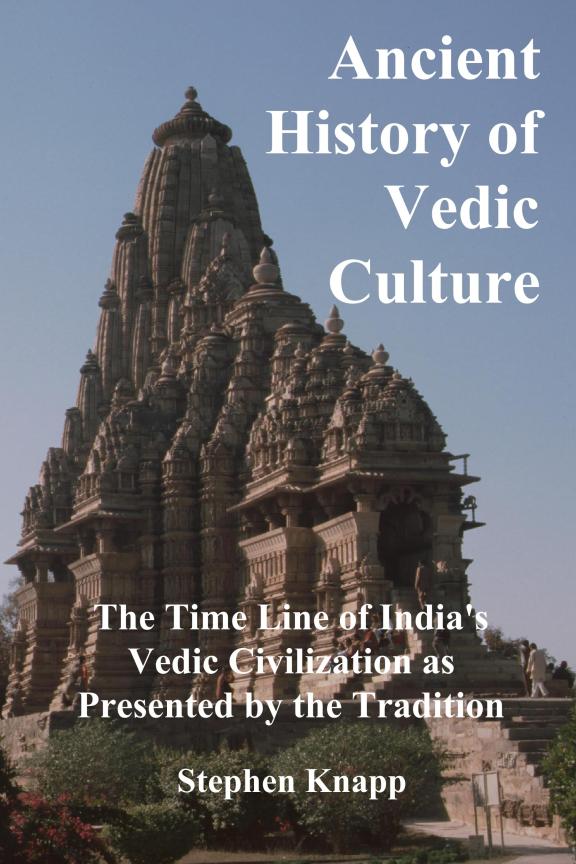 The Vedic culture of India has its own history, the tradition of which takes it back to the beginning of time. This book is not a typical review of the history of India, but explains what the pre-historic traditional Vedic background is, its basis, and how it developed and expanded through time.

We also look at a number of artifacts that prove the ancient existence of some of the most important aspects of the Vedic customs, and how the tradition itself describes its developments. This book also helps show that the spiritual philosophy of Vedic culture seeded many of the other civilizations in their beliefs that evolved in various regions of the world.

Some of the topics we view include:

* Descriptions in the Vedic texts on the way the world was created.

* The prehistoric date of Vedic beginnings.

* How the Vedic knowledge was given to humanity.

* The way the Vedic texts came from an ancient oral tradition and then was compiled by the sage Vyasadeva, and then disseminated to society.

* The antiquity of Vedic culture and the Indus Valley civilization.

* The times of Lord Rama and Lord Krishna, and proof of Krishna’s existence.

* The first recorded migrations out of ancient India of tribes that formed other civilizations.

* Astronomical dating of the Vedas and events recorded in the Mahabharata, and more.

CHAPTER ONE: 2
THE ANTIQUITY OF VEDIC CULTURE
Indus Valley 2,000 Years Older Than Thought

CHAPTER TWO: 6
VEDIC CULTURE FROM THE BEGINNING OF CREATION
Summary of the Vedic Process of Creation From the Manu-samhita * Descriptions of the Beginning of Creation From Early Vedic Texts

CHAPTER THREE: 15
HOW VEDIC KNOWLEDGE IS GIVEN TO HUMANITY
Vedic Knowledge–The Means to be Free

CHAPTER FOUR: 23
THE HISTORY AND TRADITIONAL SOURCE OF THE VEDAS
Manifesting the Vedas From the Eternal Spiritual Vibration * The Compiling of the Vedas * Rig Veda * Yajur Veda * Sama Veda * Atharva Veda * The Puranas * Srila Vyasadeva was Still Dissatisfied Until He Compiled the Srimad-Bhagavatam

CHAPTER FIVE: 45
GENEALOGY OF THE SOLAR AND LUNAR DYNASTIES
Locations of the Early Vedic Dynasties * The Prehistoric Date of Vedic Beginnings * The Gotras * First Miscalculations of Vedic Origins

CHAPTER EIGHT: 82
RECOGNIZED ORIGINS OF VEDIC SOCIETY
Theories on the Aryan Origins * Astronomical Dating of the Vedas * Looking at the References for the Sarasvati River * The Most Likely Locations for the Early Vedic Aryans * The First Recorded Migrations Out of Ancient India * The Chronology of Events in the Spread of Vedic Culture

APPENDIX ONE: 105
TIMING OF THE FOUR YUGAS

APPENDIX TWO: 113
ESTABLISHING THE AGE OF THE EARTH AND SCHEDULED TIMES OF LORD KRISHNA BY THE MANU AVATARAS

AVAILABLE AS PAPERBACK Through Amazon.com at: https://www.amazon.com/Ancient-History-Vedic-Culture-Civilization/dp/1537540122/ref=sr_1_2?ie=UTF8&qid=1474147792&sr=8-2&keywords=Ancient+History+of+Vedic+Culture

AVAILABLE AS A KINDLE EBOOK for $3.99 at: https://www.amazon.com/Ancient-History-Vedic-Culture-Civilization-ebook/dp/B01LRHZ37Y/ref=sr_1_1?ie=UTF8&qid=1474147792&sr=8-1&keywords=Ancient+History+of+Vedic+Culture

AVAILABLE AS PAPERBACK AND KINDLE EBOOK in the local currencies through other amazon outlets: