Tackling the Issues to Make a Difference 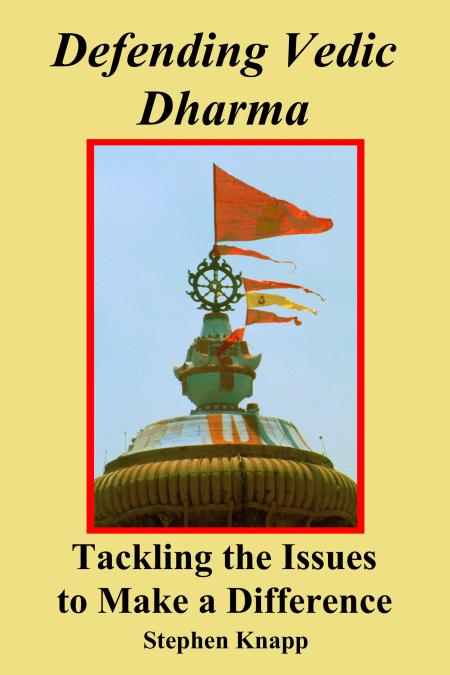 The Vedic culture and its philosophy is one of the most deeply spiritual and all encompassing traditions in the world, and has been a major contributor to philosophical thought and the development of civilization. It does not take that long to understand, but it can take some serious consideration. Until then, there can be some aspects of it that are misunderstood or misinterpreted.

Therefore, this book takes some of the issues of the day and describes what they are and the remedies for dealing with them in order to make a difference in how we participate in Vedic culture, how we can make it more effective in our lives, and how it can be perceived in a more positive way. All of this makes a difference in the objectives of preserving, protecting, promoting, and perpetuating the Vedic spiritual path.

So this book shows some of the many uplifting and insightful qualities we can find in the Vedic tradition, of which everyone should be aware and can appreciate.

Some of the stronger and important issues discussed within include:

Why it is important to use the proper vocabulary to express Vedic concepts.

Why all religions really are not the same, though many Hindus and gurus like to think they are. Time to wake up to reality.

The power of a united Vedic community, and how it could rapidly change things if Hindus actually became more united and worked together.

The importance of becoming a Dharmic leader and to do your part, and the danger of Hindu teachers who really do not lead in a way they should.

The long-term but realistic cure for the corruption in India.

The importance of Vedic temples as centers of sacred knowledge, and why temples should be open to everyone.

How and why the Vedic texts say that the knowledge within them must be shared with everyone.

The real purpose of the natural Vedic way of social arrangement, but why the present caste system in India should be changed or thrown out completely.

An eight point action plan for how Hindus in America can best use the freedoms they have, which often exceed the decreasing freedoms in India, to cultivate their tradition to its fullest extent while they have the means to do so.

The clarity with which these and other issues are addressed make this an important book for consideration.

CHAPTER ONE
SANATANA-DHARMA / HINDUISM IN A NUTSHELL

CHAPTER FOUR
THE POWER OF A UNITED VEDIC COMMUNITY

CHAPTER SIX
AMERICAN DHARMISTS: HOW TO CULTIVATE YOUR CULTURE IN AMERICA
An Eight Point Action Plan

CHAPTER ELEVEN
VEDAS SAY THEY MUST BE SHARED WITH EVERYONE

CHAPTER FOURTEEN
VEDIC LITERATURE SAYS CASTE BY BIRTH IS UNJUST
How do We Recognize One’s Varna * We are All Quite Alike * It is Only Our Actions and Qualifications That Differentiate Us * A Caste System Based on Birth is Unjust * The Damage of Unqualified Brahmanas * So Who is a Real Brahmana? * A Brahmana can Easily Fall Down, While a Shudra can Easily Rise Up * When a Brahmana Becomes Lower Than a Shudra * How Everyone can Advance * Classifications Based on the Body are Completely False * One Misses Goal of Life When Preoccupied by Caste * The Difference of Proper Consciousness and Intent, or Merely Going Through the Motions * Expected Characteristics and Actions of Each Person of the Four Varnas * In Conclusion

CONCLUSION
WHY I BECAME A DHARMIST / A KRISHNA BHAKTA

AVAILABLE AS AN ADOBE PDF READER BOOK for $4.99 at Lulu.com at: http://www.lulu.com/product/ebook/defending-vedic-dharma-tackling-the-issues-to-make-a-difference/17794482?productTrackingContext=search_results/search_shelf/center/1

AVAILABLE FOR THE BARNES & NOBLE NOOK E-BOOK READER for $3.99 at: http://search.barnesandnoble.com/Defending-Vedic-Dharma/Stephen-Knapp/e/2940013230378

IN INDIA: You can also find this book in India through Amazon's outlet at: https://www.amazon.in/Defending-Vedic-Dharma-Tackling-Difference-ebook/dp/B005STOOAA/ref=sr_1_fkmrnull_1?keywords=Defending+Vedic+Dharma%2C+by+Stephen+Knapp&qid=1555453973&s=gateway&sr=8-1-fkmrnull