One of the areas that held the curiosity of the public was  where the Naga Babas stayed. The Naga Babas are so renounced from the things in the world that they don't even wear clothes. There were many baba camps, mostly consisting of nothing but a tent, a sacred fire in the middle, as you can see here, and a rug that they sat on, while the public strolled by. 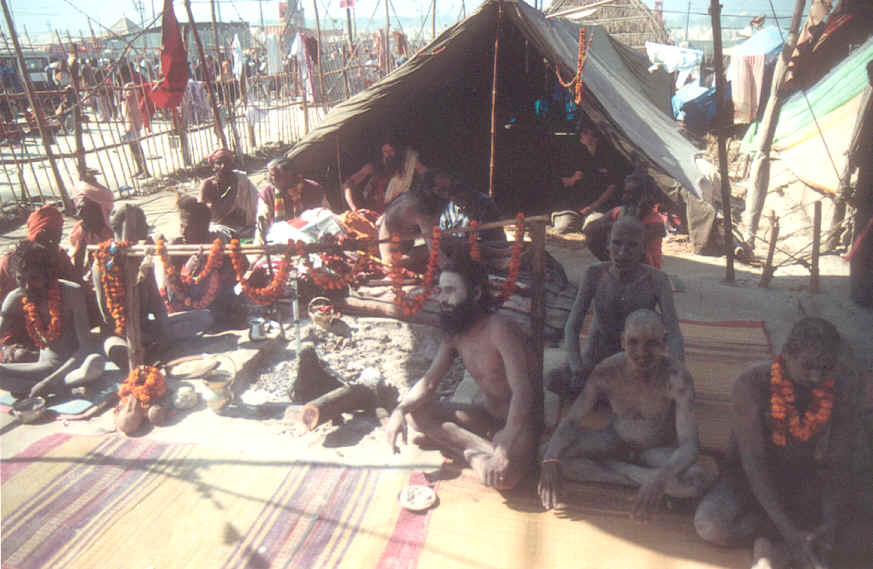 People that would come by would usually give a few rupees and then receive a little ash from the sacred fire as a blessing from the babas. Babas are of many kinds, not just the Naga Babas who have renounced clothes. Many still wear them, or have varied philosophical outlooks, but, nonetheless, their level of renunciation from this world and the things of it far exceeds that of most people. In this way, they can become much closer to God, whatever their conception of the Supreme may be. For this reason the Naga Babas and other ascetics and sadhus are highly respected by most pilgrims. 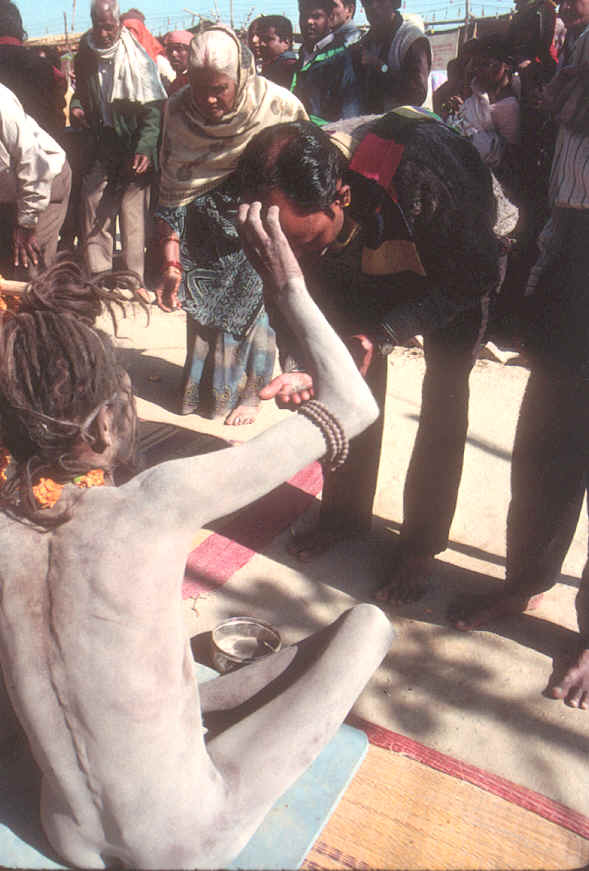 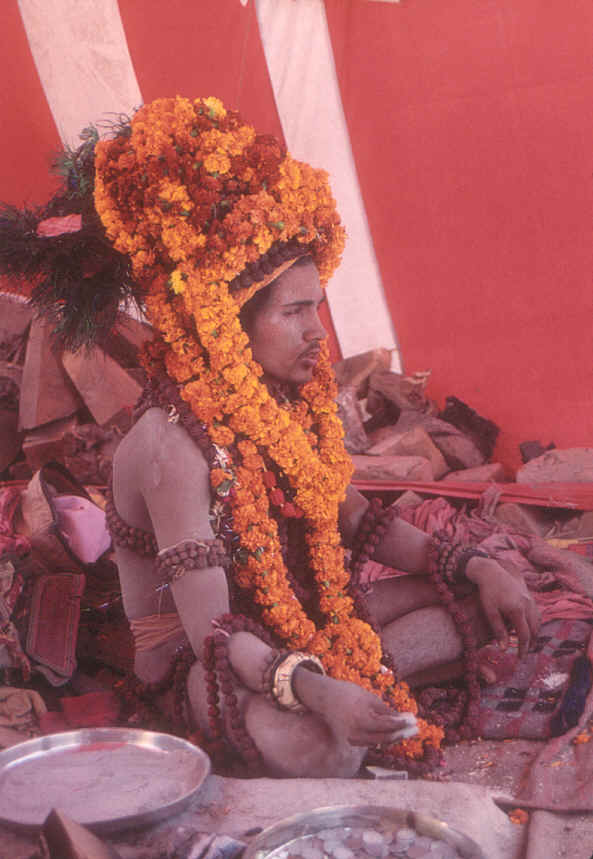 Here was another small camp of holy men. The one baba has some very long locks of hair, indicating how long he has been practicing the baba path. We have to understand that there are some very powerful yogis who attend the Mela. However, there are also many charlatans who come to share the limelight as well. Yet, you cannot always tell the difference. Therefore, we need to treat all of them with respect. Nothing can be worse for us than to earn the anger, displeasure or a curse from a powerful ascetic or yogi. 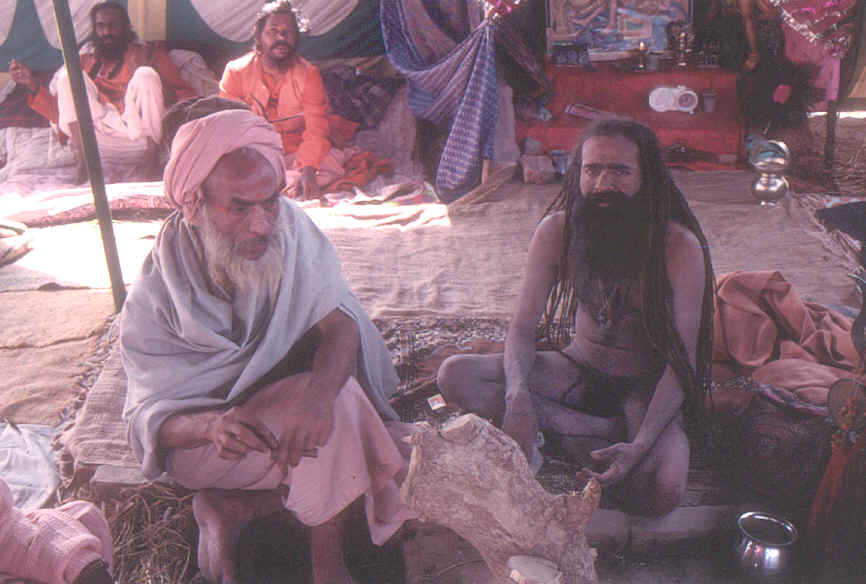 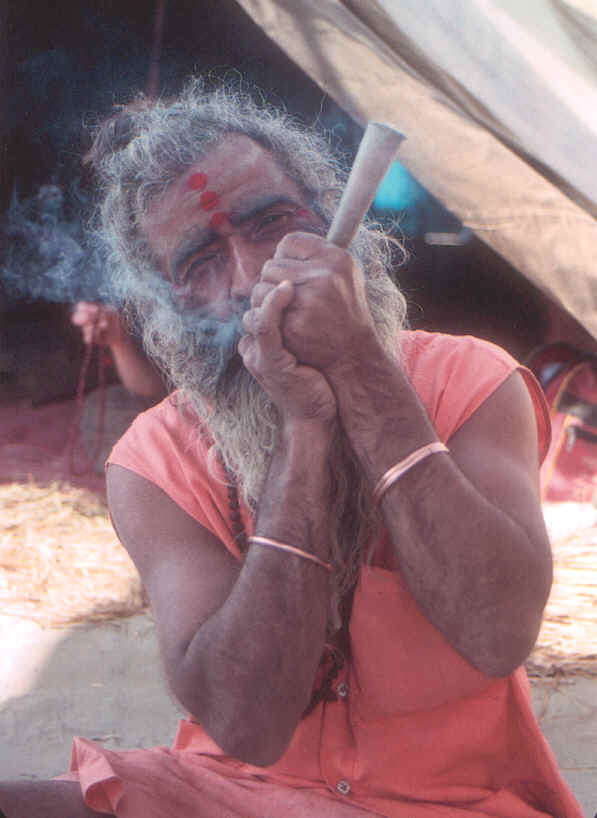 Besides engaging in silent meditation, the babas also liked to regularly take a few hits from the chillum filled with Ganja, or hashish. Most of the Babas were very friendly, and anyone could sit with them for a while. And they would share anything they had, passing it around to all who was there, whether it be fruits, tea, or their chillum. I merely passed it on to the next guy. And instead of being shy about having their photos taken, they were often encouraging me to take their photos with the people around them. They also gave me an address to send them a few copies. However, not all camps were so friendly. Some camps of babas did not want any photos taken, nor did they look especially welcoming toward visitors. (More information about the babas and various Akharas is given in the special report I include on the Kumbha Mela page.)

As night would come, the camps and temples at the Mela would often get more crowded. Many pilgrims would do their bathing in the Ganges during the day and explore the spiritual camps at night. The lights of the streets as well as the temple fronts would come on,  adding to the festive atmosphere. However, after a long day, some pilgrims would simply look to take rest, either at their tents that they may be renting from one of the spiritual groups, or they would simply camp out in the open. As we can see below, in spite of the lights and the sounds from the loudspeakers, some pilgrims are relaxing against their luggage, or starting cooking fires to prepare their evening meal or to stay warm. Some of the nights at the Mela were very cold. 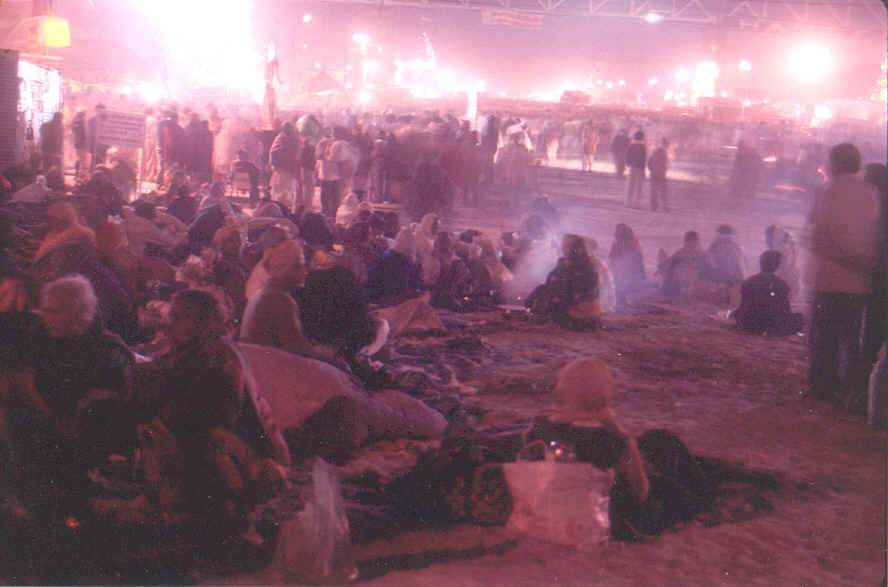 On the night before Amavasya Day, the Kumbha Mela grounds were alive with activity. People were taking advantage of the auspicious time to bathe in the waters at the sangam (the confluence of the Ganges, Yamuna, and Sarasvati Rivers) all night and into the day. Other pilgrims were watching the special "Parade of Saints," which started at 5:00 AM. Below we can see the beginning of the parade as it flows through a sea of people. 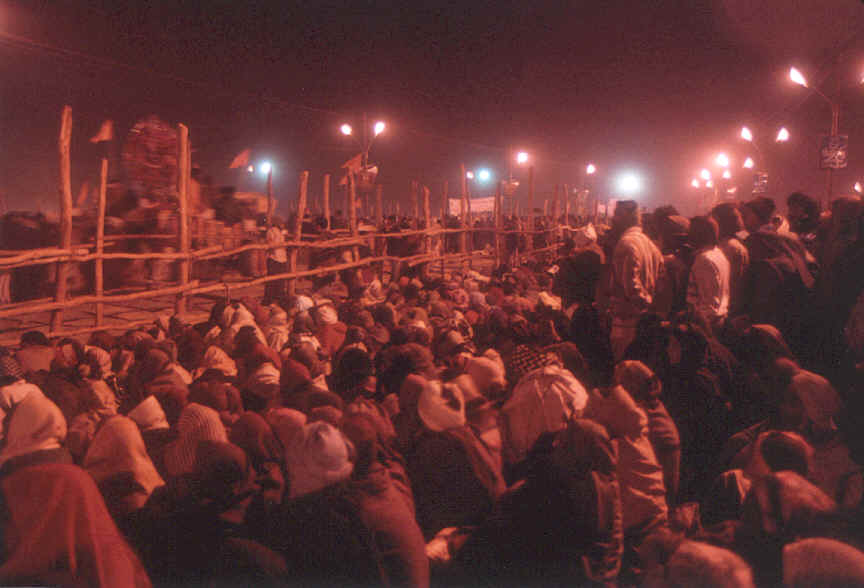 Below is a view of the carts, each representing a different group, all gathering on one of the pontoon bridges, crossing over the Ganges to the sangam area.

Below is another view as the parade goes to the sangam area. 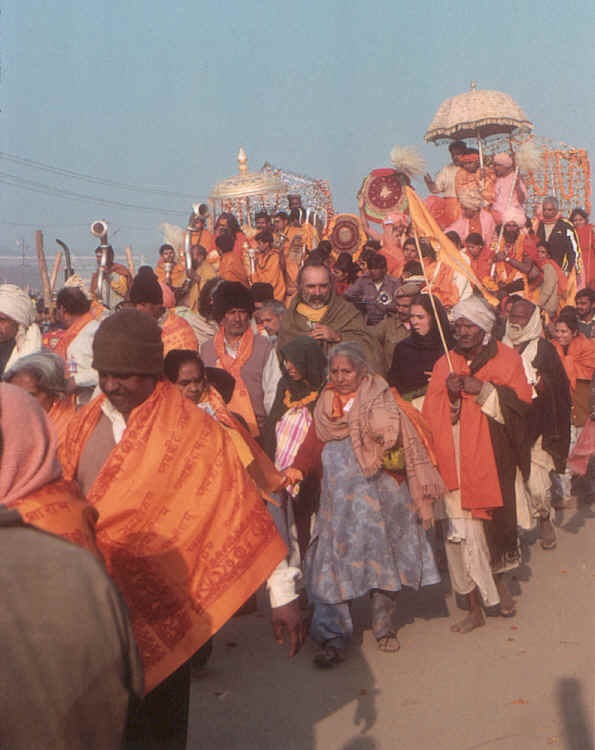 Here we can see one of the spiritual leaders giving blessings to the crowds as he rides on his cart in the parade. 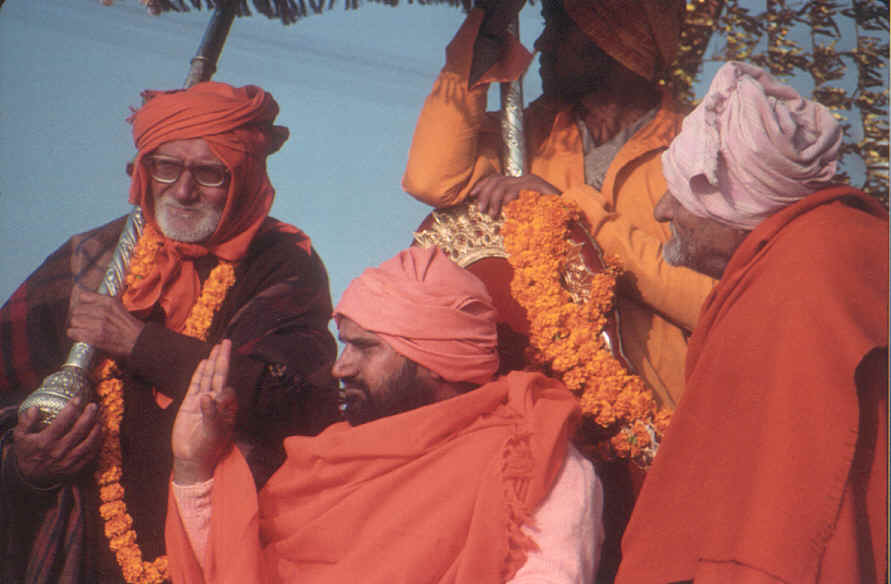 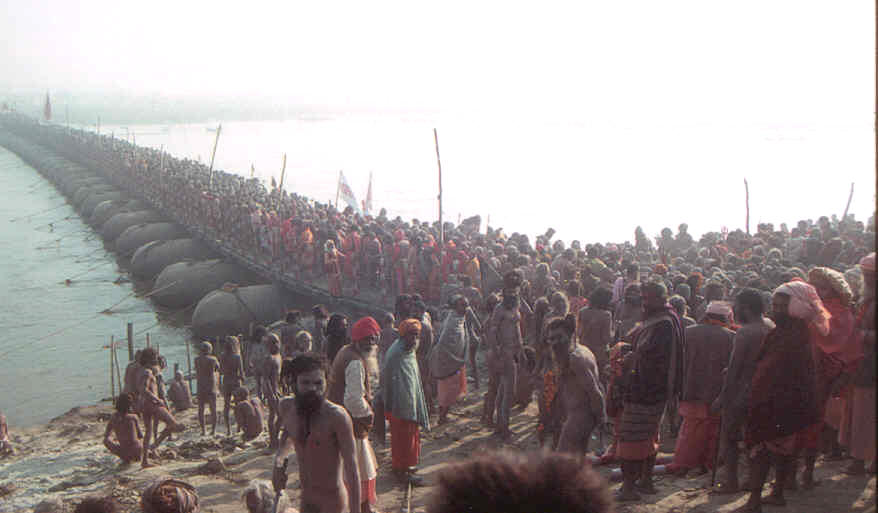