A visit to the holy town of Ahovalam (or Ahobilam) in South India is known for the place where Lord Narasimha appeared to protect His devotee Prahlada from his demoniac father. In the central part of town is the beautiful temple of Lakshmi Narasimha, with the lovely Deities seen here. Then you have to travel into the woods to see the other forms, as shown further below. The most important is JwalaNarasimha, which is the angry form of the Lord, located at the place where Lord Narasimha killed the demon Hiranyakashipu. The other forms and Deities also have pastimes and stories which are connected with them. 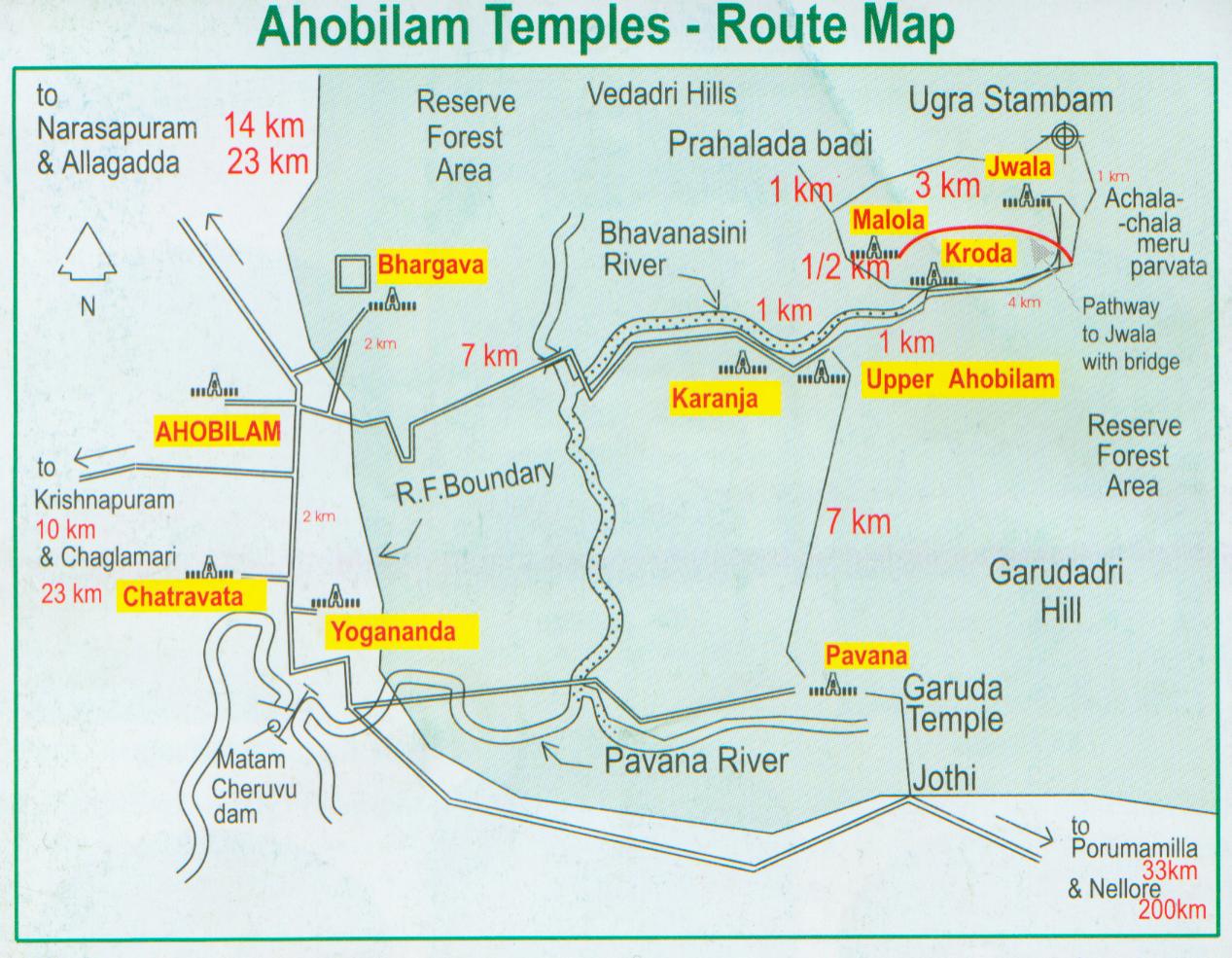 The Deities of Lakshmi-Narasimha in the central part of town. 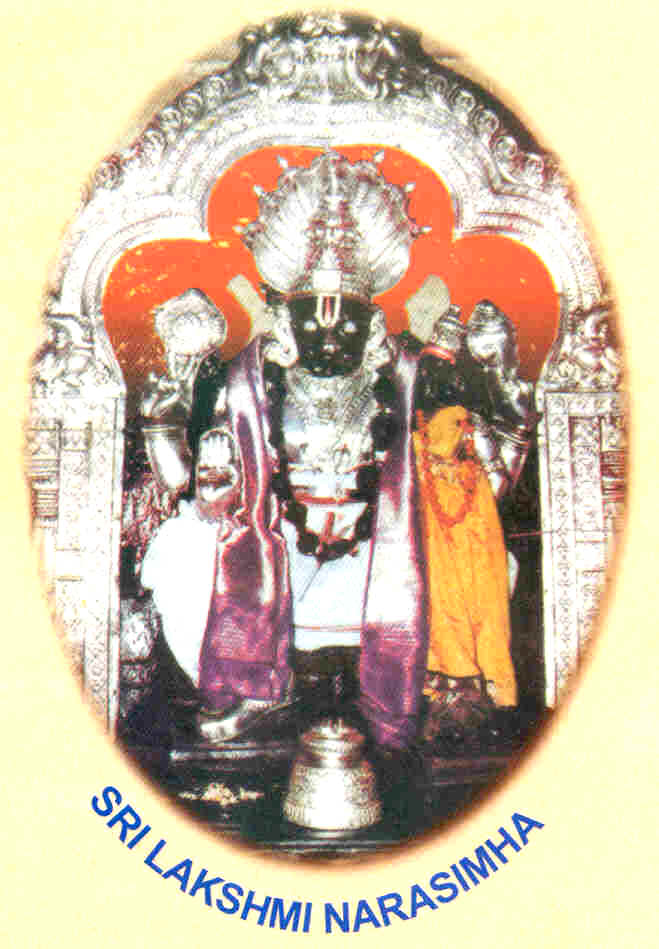 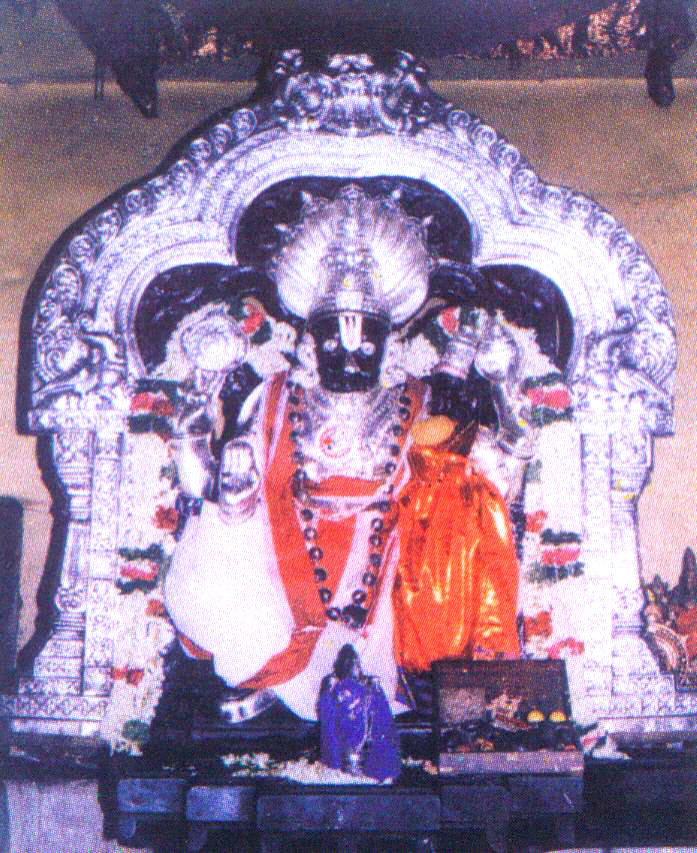 One of the main deities of Ahobilam, the Sri Ahobila or Narasimha Deity, the first you see when you arrive at Upper Ahovalam 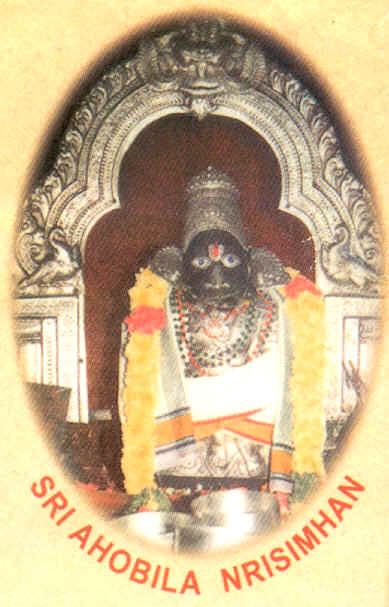 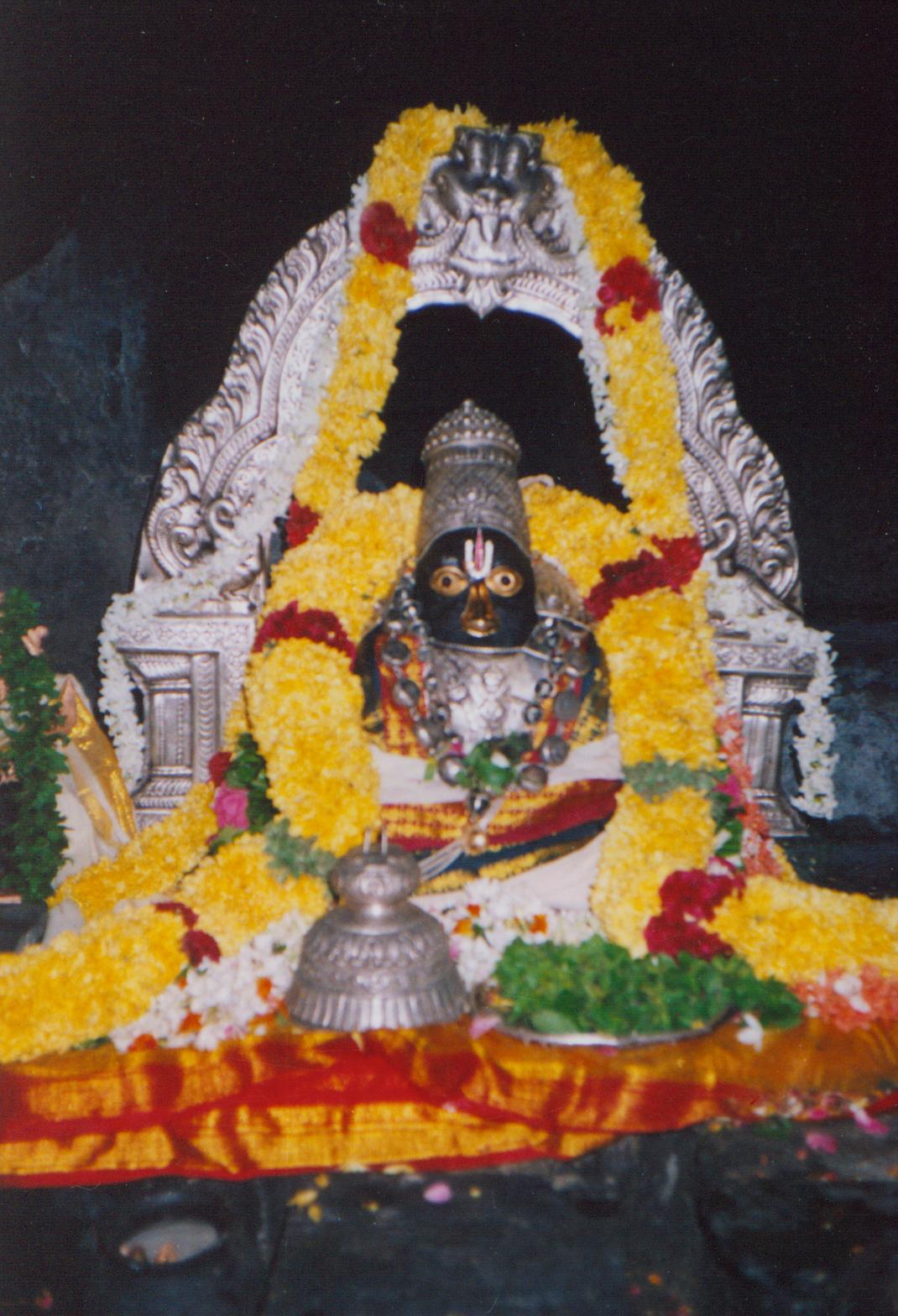 After climbing the steep stairs up the hill when you first arrive at Upper Ahobilam, you then walk through a thick forest to reach the temple of Pavana or Bhavana Narasimha. 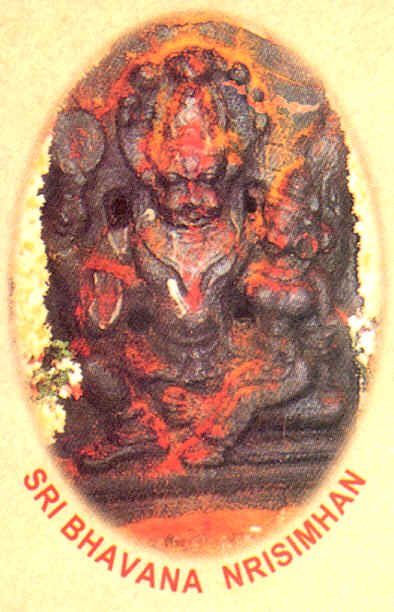 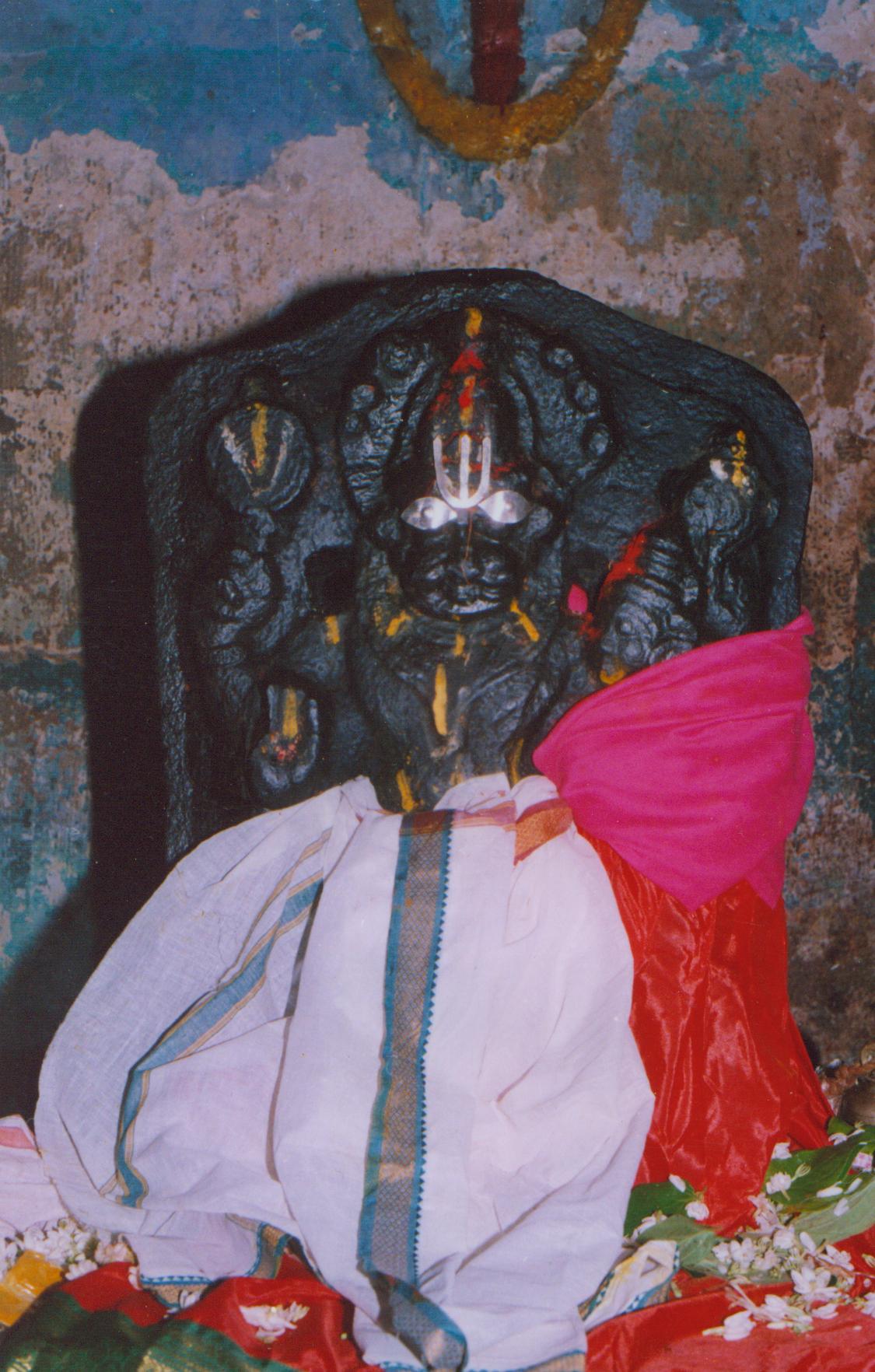 The first Deity on the path out to the Ugra Stambha in Upper Ahobilam is Varaha or Kroda Narasimha. 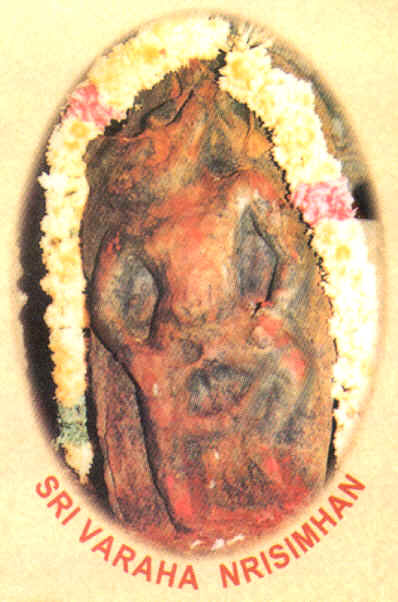 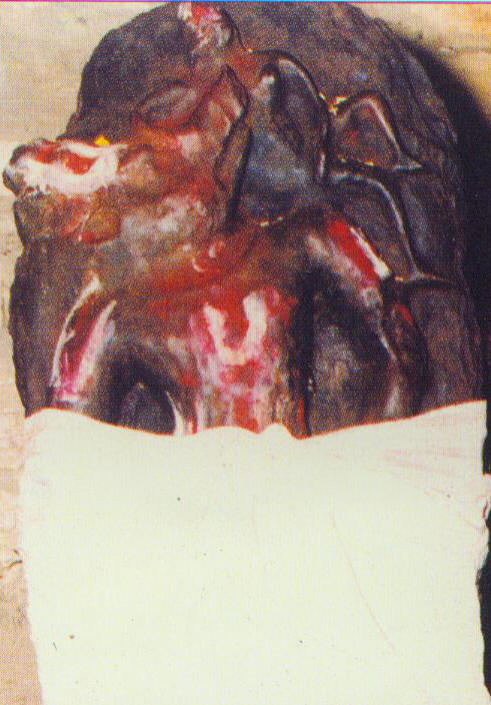 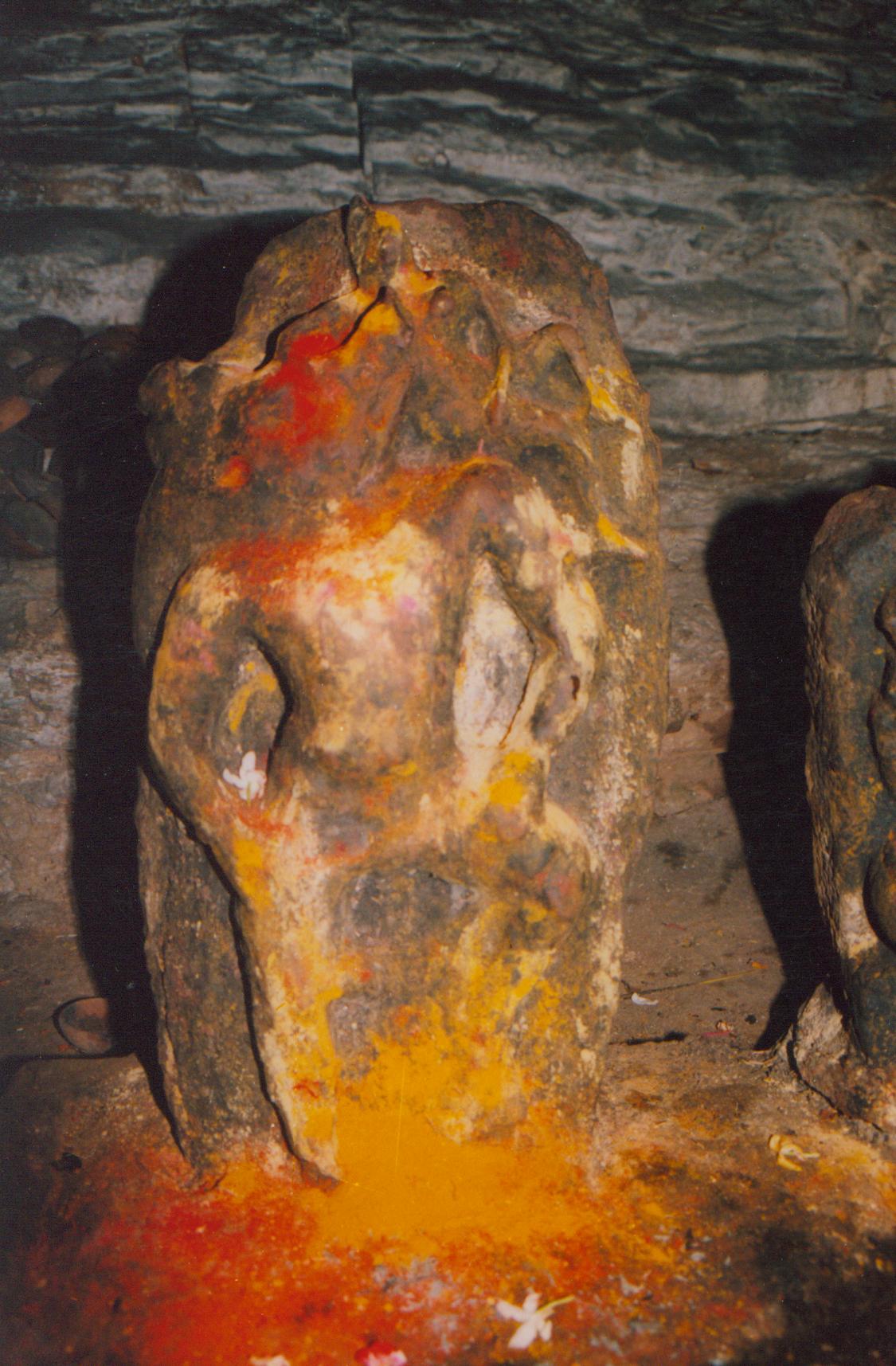 The Malola Narasimha Deity located up on the hill from Varaha Narasimha. 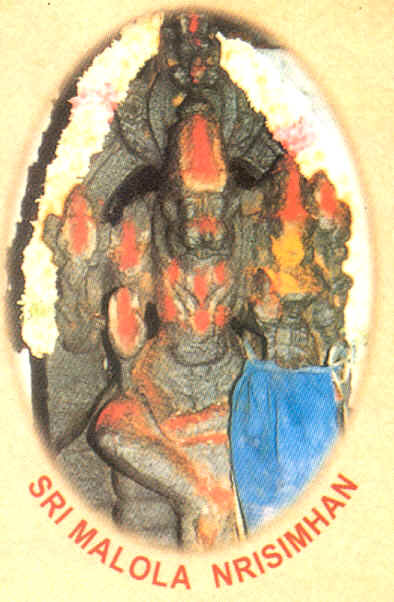 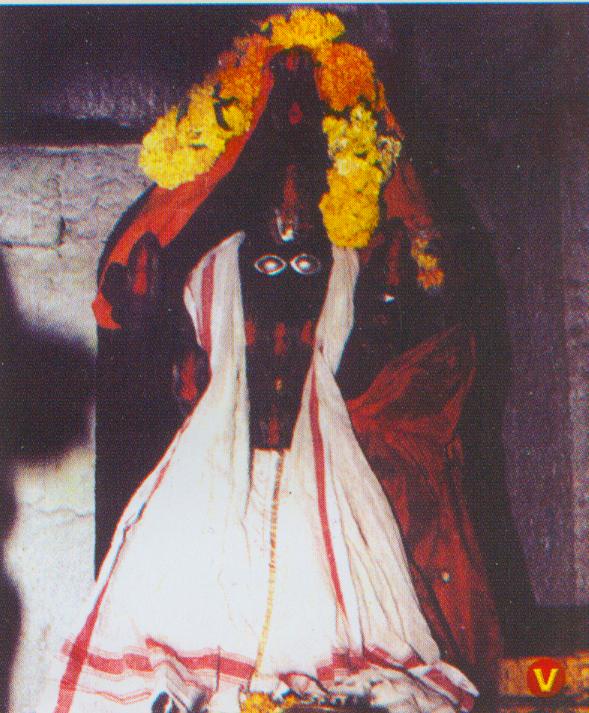 The final destination when visiting Ahobilam, particularly Upper Ahobilam, is Jwala Narasimha, which means angry Narasimha. This is the Deity which exhibits Lord Narasimha as he bifurcates the demon Hiranyakashipu. A visit to Ahobilam without seeing this darshan is said to leave your pilgrimage incomplete. The Deity is located up the side of the hill near the Ugra Stambha, or the pillar from which Lord Narasimha appeared. 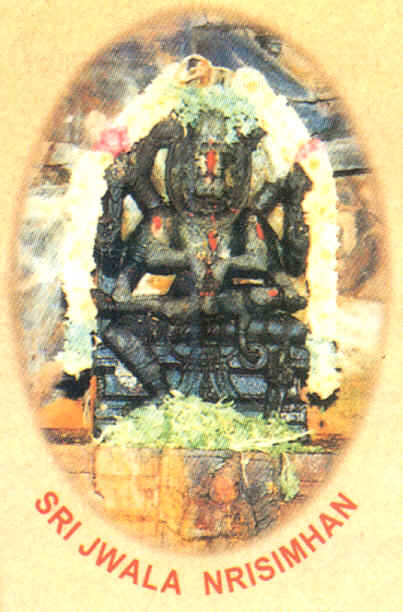 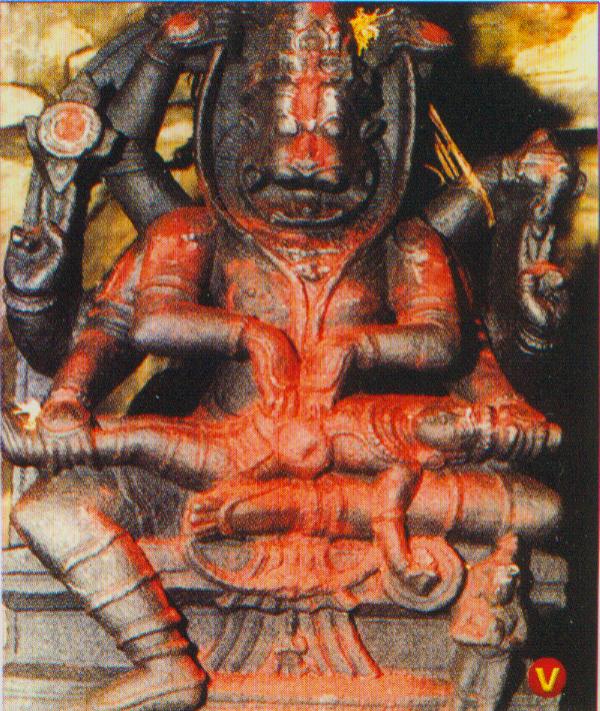 On the way down from Upper Ahobilam, this is the last Deity you see, or the first if you stop here before going on up. 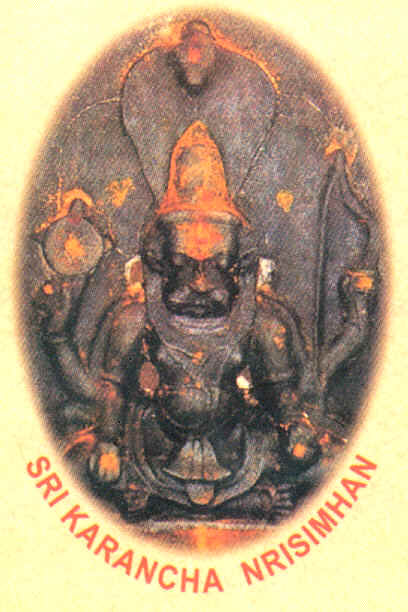 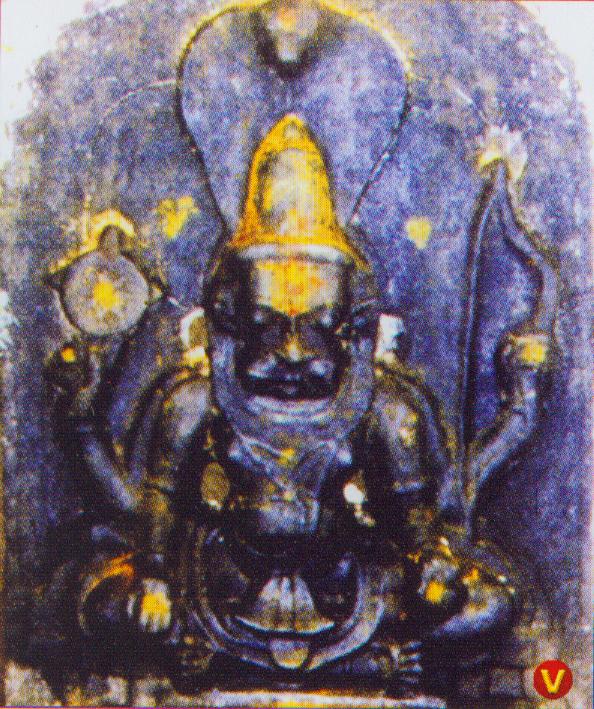 Bhargava Narasimha is located in Lower Ahobilam out in the woods and up a stairway from the kund or water pond where the sage Bhargava Rishi would perform his austerities. 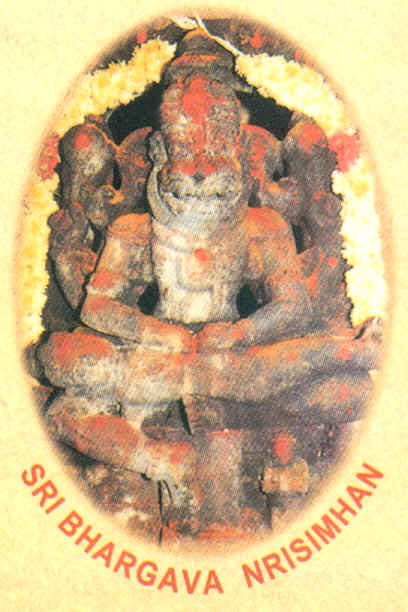 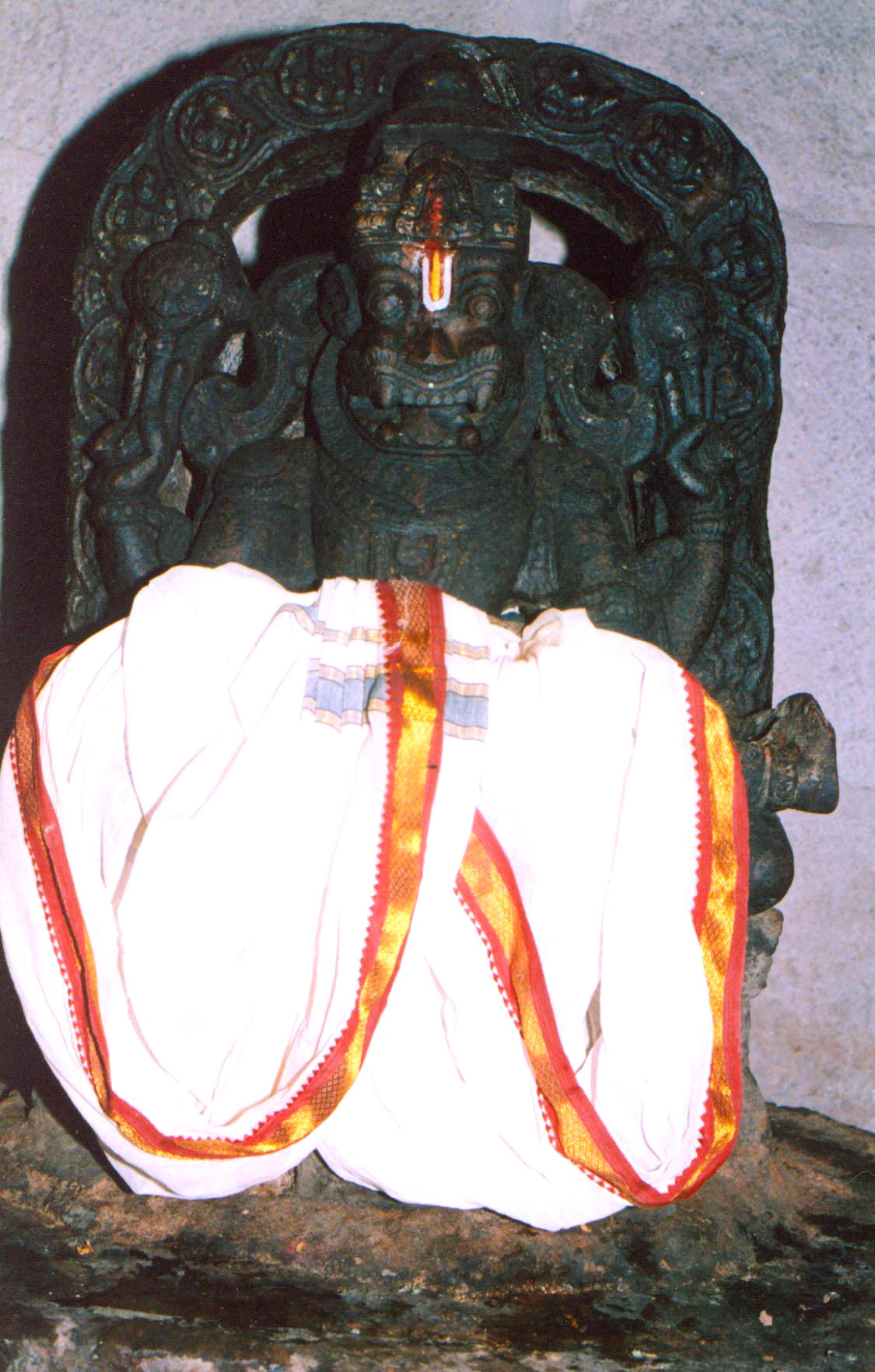 Coming back through town and going to the east down a bumpy road we come to the temple of Yoga Nandha Narasimha, where He is sitting in His yoga position. 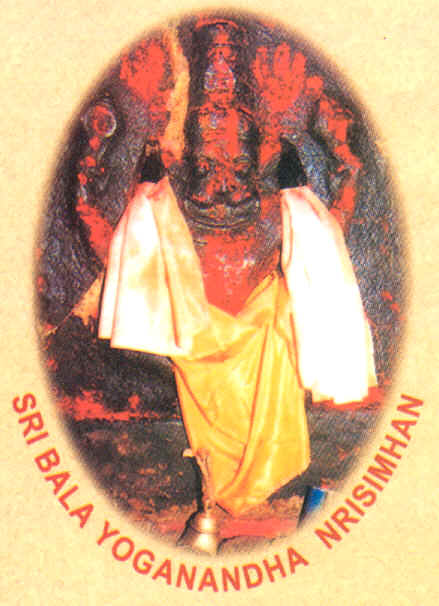 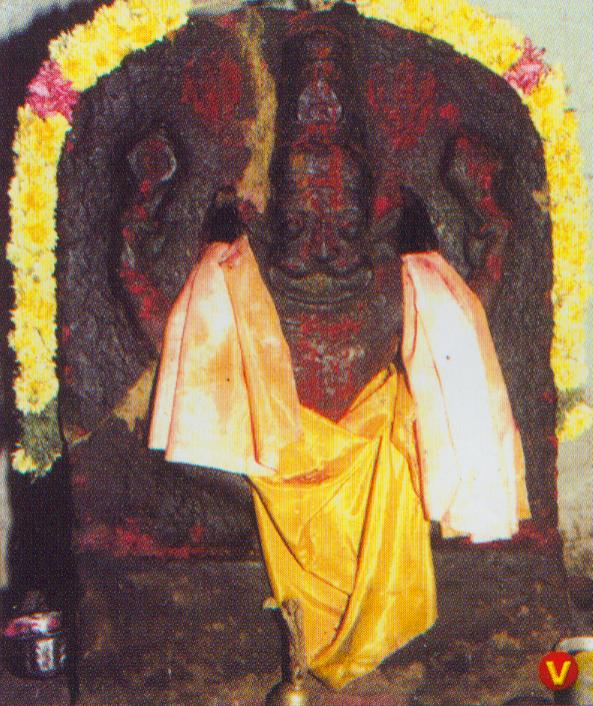 A long walk or a drive through the fields south of the Yogananda Narasimha temple we come to the temple of Chatravada Narasimha, which is out away from everything and in a peaceful location. 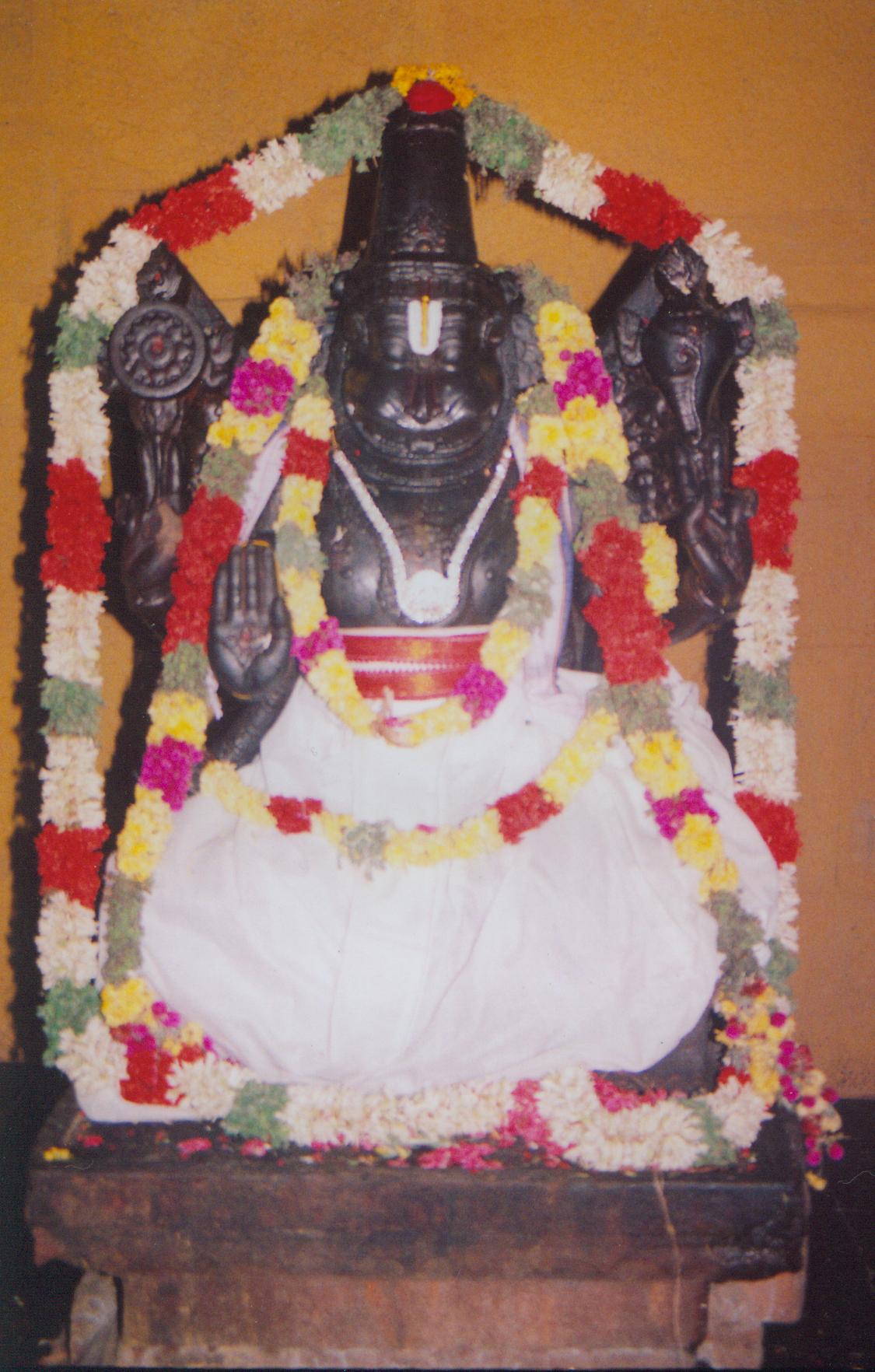 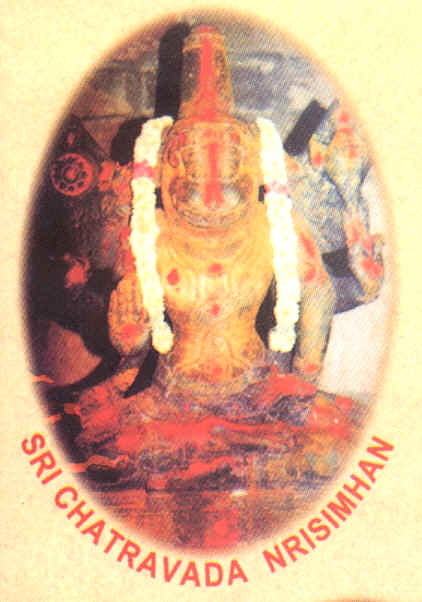 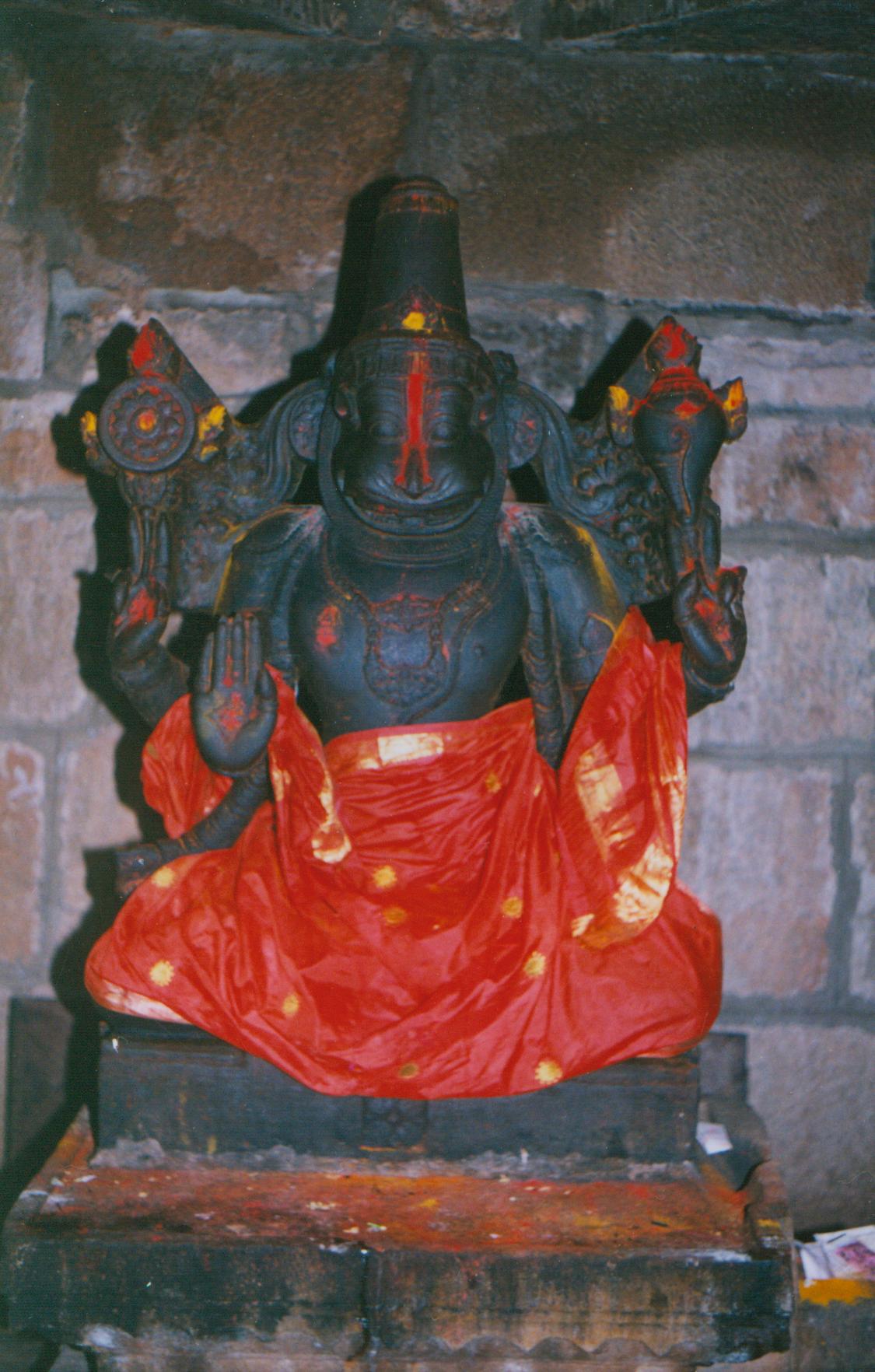