Visiting the town of Jagannatha Puri is rarely achieved, except for those who have performed many pious acts. It is stated that simply by visiting this town and by seeing the Deity of Lord Jagannatha (Krishna), one can easily attain freedom from future births and reach the spiritual abode. Therefore, it is a most special occasion to visit this holy place, and to visit the temples that one can find here. That is why we take the privilege to visit the town and then present to you these photos for your spiritual advantage.

The Sri Mandir, the main temple in the center of town, is the most significant, and is where the most popular Deities of Lord Jagannatha (a form of Lord Krishna), Lord Balarama (Krishna's brother), and Lady Subhadra (Lord Krishna's sister) reside. However, the temple excludes those who are not born Hindu. So us foreigners will not be able to enter inside to see the Deities. Nonetheless, once a year there is a huge festival in which we can still see the Deities when They come out of the temple. It is this festival, known as Ratha-Yatra, which is mostly for those who are either non-Hindu, or not allowed into the temple, yet who long to see or have darshan of the Deities. (Be sure to read my article, The Ratha-Yatra Festival at Jagannatha Puri, also included on this website, to get a better understanding of what it is and of the photos that follow.)

Below we see the main temple, known as the Sri Mandir, which is the central focus of the town. 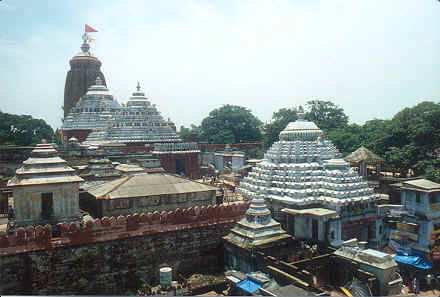 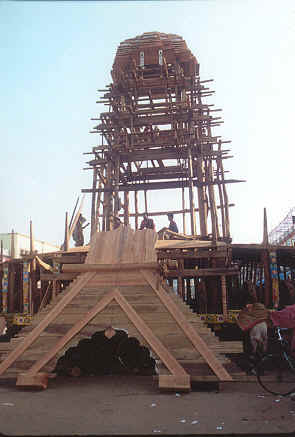 Everyone of all ages that are in the family of carpenters that make the carts helps with the preparations, such as this little boy doing some of the painting. 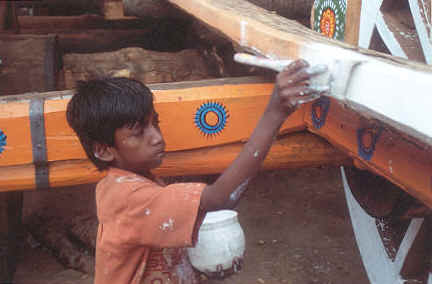 The construction of the carts goes on 24 hours a day, and the day just before the festival, the carts were sitting in front of the main temple ready for the Deities. Here you can also see the large walkways in front of the carts that lead up to where they will bring the Deities, Who then sit to ride down to the Gundicha temple at the other end of the street, 2.5 kilometers away. 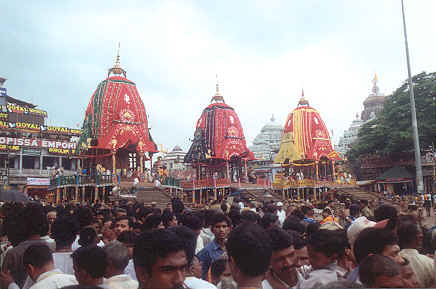 On the day of the festival, many thousands of people begin to gather on the main street near the carts. It is not unusual for 700,000 to over one million people to attend. In front of the carts were several large kirtana (devotional chanting) groups, including this one of Iskcon, the Hare Krishna Movement, that had as many as 2000 devotees, primarily from the Chowpatti temple in Mumbai (Bombay). This was also seen on television all across India, since many cameras from the television networks were capturing the event, along with the singing of the chanting groups. 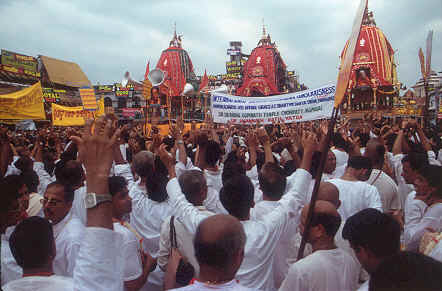 Once I'm out of the crowd and on the roof of the library across the street we get a bird's eye view of the event. The carts are ready, and many police keep the people from getting too close to the carts, where the Deities will be coming in a few more minutes. 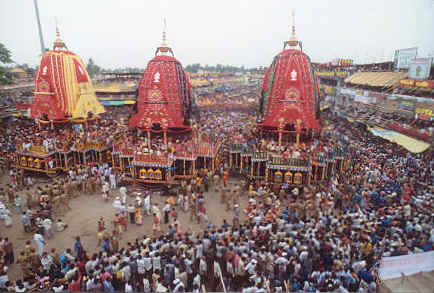 When the Deities begin to exit the temple and come into view, the people and devotees get really excited and often shout out in jubilation, "Jayo, Jaya Balarama!" or "Jaya Jagannatha!" Here we see Lord Balarama, wearing a large and beautiful headdress being carried to His cart. As you can see, He is very big and as tall and much heavier than the men who carry Him. 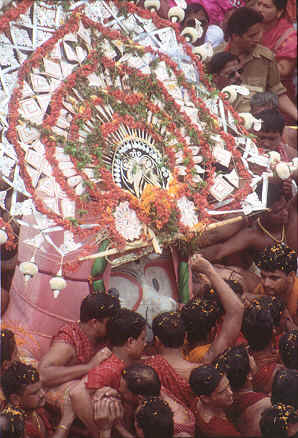 There are many men, called Daitiyas, who maneuver the Deity. Many pull on ropes from the front, others help lift His arms, while still others help by pushing from the back. Gradually, with a dramatic rocking motion, He moves through the crowds to His cart. 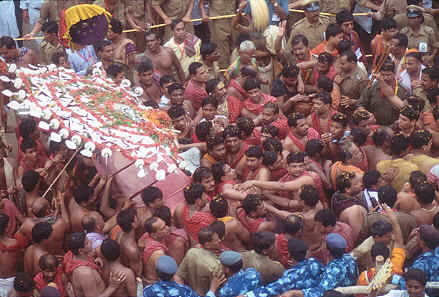 Once He arrives at His cart, the men must work even harder to bring Him up the walkway to where He will sit to ride during the parade. Here He is rolling so far back that Lord Balarama is almost completely horizontal. 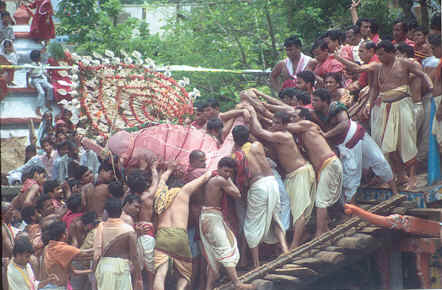 When Lady Subhadra comes out of the temple and is taken to Her cart, She is much liter. So a group of men simply carry Her straight away to her cart and up the walkway to Her seat. 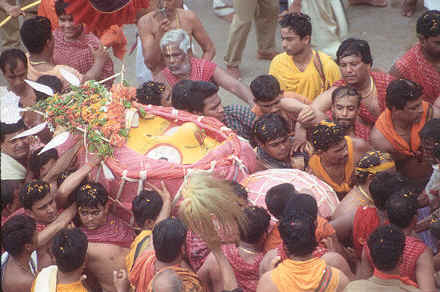 Finally, as Lord Jagannatha emerges from the temple doorway, the crowd really gets excited, all shouting their devotional phrases and prayers to Him. Slowly, the Daitiyas carry Him from the temple and to His cart for all to see. From the ground it may be difficult to see Him, but His large headdress clearly shows where He is located.

Here is a close up of Lord Jagannatha as He moves along.

Finally, they move Lord Jagannatha into position for carrying Him up the walkway. Once this is complete and He is in position, and after the King of Puri comes to sweep the carts, then it is only a matter of time before the carts are ready to start being pulled by the crowds of devotees down to the Gundicha temple where the Deities will stay for a week. 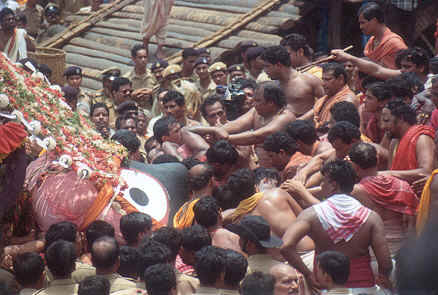 More photos of the parade and the Deities are in group two on the next page.